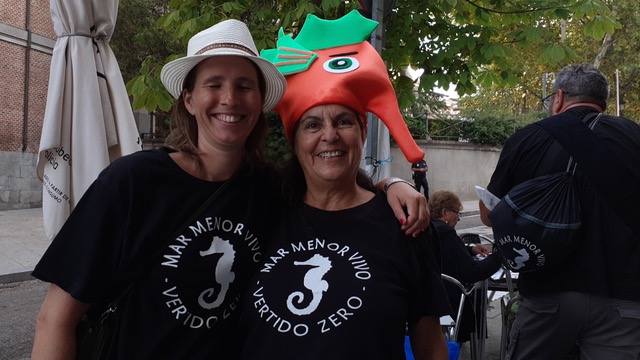 Black flags and the Mar Menor

Lawyer and cultural anthropologist Carolijn Terwindt from the Embassy of the North Sea went to Spain, where she visited the initiators of the law that made the highly polluted lagoon Mar Menor a legal entity.

At 2.30 AM in the morning, I was waiting with a group of mostly pensioners for the bus that would take us from Murcia to Madrid. Several hours later we arrived in Madrid, just in time to hear the politicians from the Senate give their opinions on the law which would give the Mar Menor legal personality. On 21 September 2022, this law was up for a vote in the senate. This group of people had been working tirelessly for nine months to collect the more than 600,000 signatures that led to this bill. The moment the result was announced and the lawbecame a reality, the song Sol y Sal (Sun and Salt), written especially for the Mar Menor by a band from Murcia, echoed through the streets of Madrid. Everyone loudly sang along to the lyrics.

This group of activists did everything voluntarily. Coordinating the collection of signatures was Teresa Conesa, a cheerful grandmother who remembers well how as a child she used to play with seahorses in her beloved Mar Menor. Now there are no more seahorses, and she feels it is her responsibility to ensure that the Mar Menor becomes a healthy lagoon again. Talking to her, she gets emotional more often than not. The past two years have been dominated by street mobilisations for the Mar Menor. She painted the seahorse logo on many black flags that were carried in the streets during their demonstrations and hung on balconies in the streets of villages around the Mar Menor as a symbol of mourning. The group with whom she organised these demonstrations is therefore also called Banderas Negras (black flags). Her flags now hang in an art gallery because of their special significance. From a timid woman who never dared to say anything at school, she has grown into her role as a spokeperson for the Mar Menor during actions in the streets. Her husband cooked for her these years. Without her, so many signatures would never have been collected. The Banderas Negras celebrated their success with a big cake with the number 639,826 engraved on it in icing: the exact number of valid signatures they had collected.

In conversation with Isabel Rubio, she shows me a black-and-white photo of herself playing at the Mar Menor as a child. Many people have memories of long summers at this Spanish inland sea. In only a few years, the older generation has seen how the sea has gotten worse and worse. This provokes regret and guilt, as well as a desire to ensure that their grandchildren can swim in the sea again. Isabel was given an underwater camera when she retired, and since then her website has grown into the best documented flora and fauna resource about the Mar Menor. Even though she couldn’t list five species of fish when she started this, she has become increasingly interested and has looked up all kinds of information on the internet. After ten years, she is now a much sought-after expert at international scientific conferences on the health of aquatic ecosystems (check out her website here). Isabel Rubio founded the organisation Pacto por el Mar Menor and filed a complaint with the Committee of Petitions in Brussels in 2016, which in 2022 led to the visit of a commission of enquiry from Brussels to the Mar Menor.

Teresa says the first step should be to revive the love for an ecosystem. The sea is so much more than water alone, just as a forest is more than a collection of trees. My conversations with people like Teresa and Isabel make the Mar Menor come alive, with the different fish, jellyfish and types of plants that live there together. These women have a message for the rest of Europe: don’t let the fish die en masse before you take action to protect nature. Let the Mar Menor be the warning sign to everyone: indeed, the existing environmental legislation and several court cases around pollution from agricultural irrigation failed to effectively protect the sea.

Compliance with the new law

Lawyer Eduardo Salazar, who also filed several lawsuits on behalf of Greenpeace based on the existing environmental law, will now have more opportunities to protect the Mar Menor with the new law. He will be one of the people who will join the commission that acts as a guardian and is responsible for overseeing the interests of the Mar Menor. The Banderas Negras have set up the next foundation that will oversee compliance with the new law. Things are just getting started.