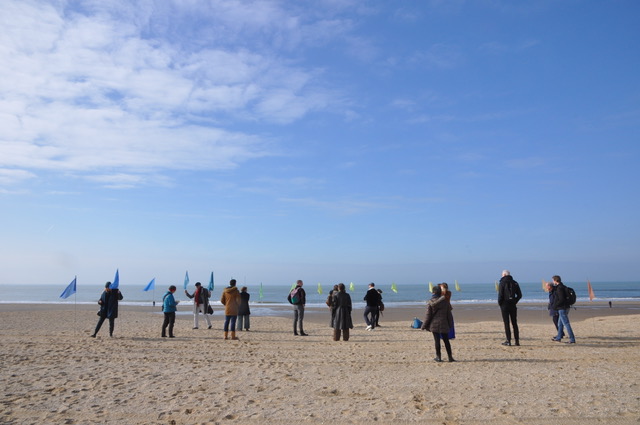 In 2020, the Embassy of the North Sea will be working on three North Sea cases: Future of the Delta, Underwater Noise in the North Sea and A Voice for the Eel.

’To listen to and tell a rush of stories is a method. And why not make the strong claim and call it a science, an addition to knowledge? Its research object is contaminated diversity; its unit of analysis is the indeterminate encounter. To learn anything we must revitalize arts of noticing and include ethnography and natural history.”

– Anna Tsing. The Mushroom at the End of the World

The world has changed fundamentally. In the West, we have always viewed humans as the only players on Earth, but the Earth is starting to call back to us with forest fires, acidification of the oceans, pandemics and melting icecaps. In this period, the Anthropocene, our lifestyle is tied closely to ecological footprints, and our production to the climate. Something that has long been self-evident in non-Western society is that plants, animals, microbes and things all influence our world. Icebergs help form our coastlines, insects determine our agricultural yield and microbes define our state of mind. In the Anthropocene, we share the same podium with 99.999999% of life. Non-humans are now also political actors.

These realisations call for a new policy approach in which non-humans – and the relationships between humans and non-humans – are directly represented. Political representation is in essence ‘re-presenting’ a political actor (Hannah Pitkin, 1967). Good representation calls for the greatest possible degree of empathy. In the case of non-humans, to a certain extent this requires setting aside our humanity, and embracing the unusual. Without  research and imagination this is not possible.

The research teams of the Embassy of the North Sea made the first attempts to listen to non-humans in 2019. We based our work on methods distilled from Bruno Latour’s Facing Gaia and Down to Earth. Another important source of inspiration was Anna Tsing’s The Mushroom at the End of the World. According to Tsing, listening in the field and storytelling are the most essential methods for being able to trace relationships between humans and non-humans and understanding how our world actually works. Starting with the rare Matsutake mushroom, in her book, she presents a study into the relationship between capitalist destruction and collective survival. She reflects an interest in subcultures and rituals and the distribution chain in relation to this mushroom. She calls for a world in which we recognise the mutual dependency of all things in the living world.

Inspired by this fieldwork method, in 2020, the Embassy will be carrying out in-situ interdisciplinary research into three North Sea cases: Future of the Delta, Underwater Noise in the North Sea and A Voice for the Eel. Which meetings between humans and non-humans play an important role in these urgent North Sea issues? And can we imagine other options for cohabitation? Listening to North Sea communities and storytelling are the most important study methods. In addition, we will be working on instruments and methods that will help us learn to listen to non-humans and promote their interests. Through this fieldwork, the Embassy will acquire a greater understanding of its own political grassroots.

Artists, scientists and storytellers are working together in interdisciplinary research teams on each case. Artists and designers will investigate the community on location, and may succeed in expanding the existing arsenal of listening tools and methods. Specialists such as scientists and people with hands-on experience will use knowledge of the community to generate data and new insights. The storytellers will then translate the generated insights for a broader audience. On location, the study teams will be working closely with local residents and organisations.