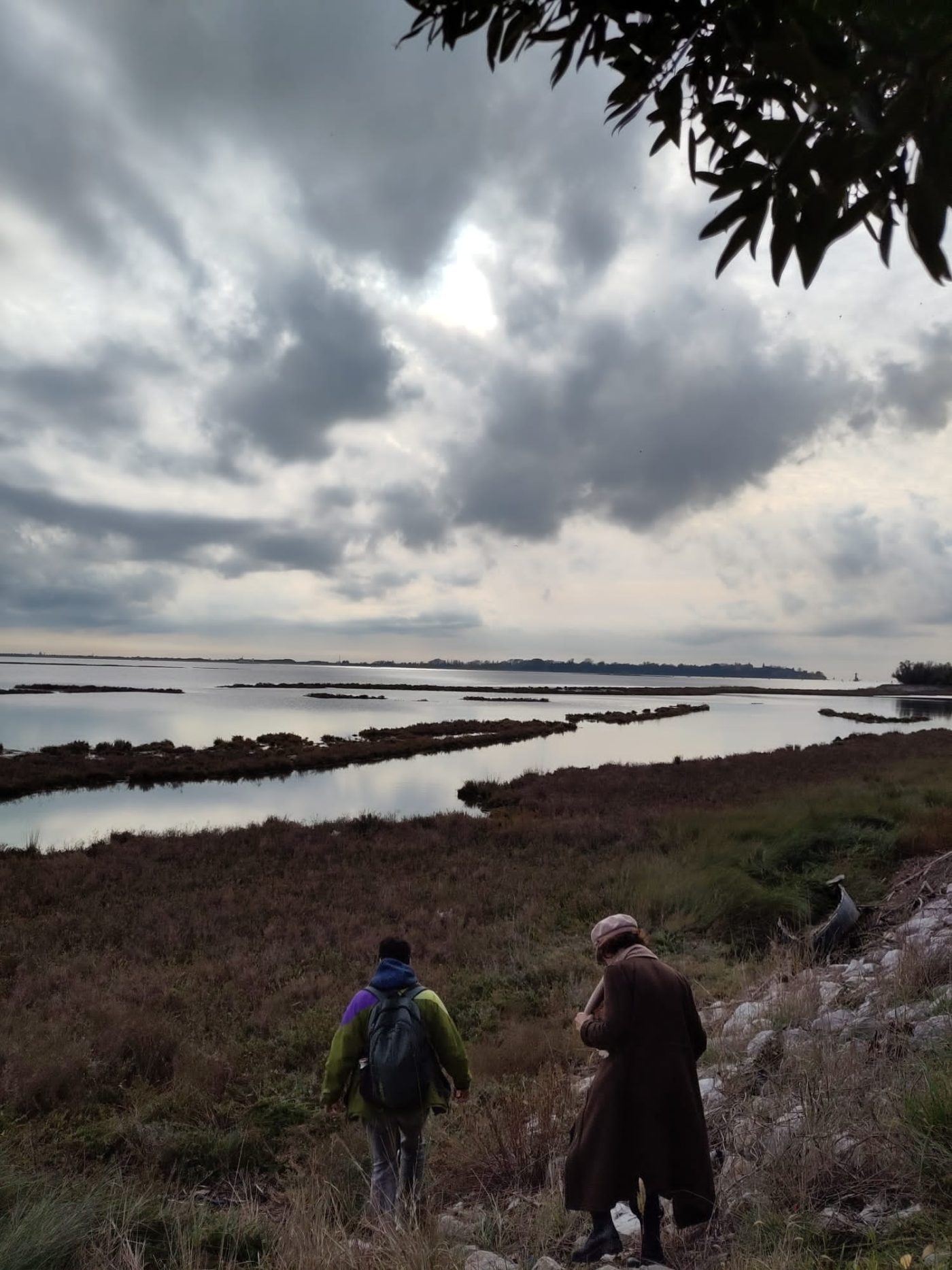 Stories from the Venice Lagoon

Ocean Space /TBA21 is our Italian conversation partner, committed to exploring the representation of bodies of water with us and other European waters. Located in a beautiful church in Venice, Ocean Space is a center for exhibitions, research and public programs, catalyzing ocean literacy and advocacy. The organization is established and led by TBA21–Academy, a research center that fosters a deeper relationship to the Ocean through the lens of art. Markus Reymann is TBA21’s charismatic director. In November 2022, after most tourists left the city, the delegates of the Embassy of the North Sea paid a visit to the Venice Lagoon. The lagoon and its inhabitants showed us their view on the relation between humans and non-humans, the role of children and intergenerational learning of the love for the ecosystem. Carolijn Terwindt of the Embassy of the North Sea, reports on the many human and non-human encounters in the Venetian ecosystem.

People and the city are part of the ecosystem

On our arrival in Venice, warmed by the winter sun with a coffee on one of the town squares, we meet with Pietro Consolandi. He is a fellow of TBA21–Academy’s inaugural Ocean Fellowship and initiator of the artist collective Barena Bianca. For Pietro, the destruction of the social fabric in Venice and the destruction of the ecosystem are the same thing. At our table we also speak with Eleonora Sovrani, the artistic director from We Are Here Venice, a local NGO which advocates for the preservation of Venice and the Lagoon, as according to them safeguarding the city equals safeguarding the lagoon. She tells us that the inhabitants of the island feel abandoned by their politicians who mostly live on the mainland and not on the island. The freshwater of the lagoon is already becoming more like the sea, which increases the town’s flooding. Without real inhabitants on the island, Eleonora fears that the place would become an amusement park. In their perspective, the city, its inhabitants and the water body are entirely intertwined and should be viewed as one ecosystem. The We Are Here Venice activists therefore work simultaneously on issues of housing, flooding and the biology of the lagoon.

Pietro emphasizes how children in the city are often invisible. Tourists tend to be surprised to see there are actually children living there. In his art projects, he frequently involves the children of Venice in participative street actions. Pietro further works with the concept „shifting baseline syndrome.” He explains that this all too often leads people to regard it as normal that nature is destroyed. For example, Venice has lost 70% of its marshlands. As we speak about the question whether this means that people have lost the connection to nature forever, Pietro maintains that even though it only takes one generation to destroy knowledge and consciousness it also only takes one generation to rebuild it.

On our visit to the island Murano-Burano, we meet with Nadia from Assoziazione AtlantIdee whom we soon call the wise marshland witch with her herbal medicine, nature-based artworks and humble attitude. She regards the plants that she collects and works with as „gifts“ from the lagoon. She feels a strong connection with the plants and is glad when she can help plants to reach a person that is aided by its medicinal power. Nadia regrets that many people do not know the lagoon anymore and wishes more people would understand the lagoon as a living being. According to Nadia, experiencing the lagoon and its marsh plants in their life cycle is important to keep the knowledge alive and teach it. She observes that older inhabitants lose their motivation to pass on their plant knowledge to younger people when they are met with disinterest.

Falling in love with the lagoon

Nadia highlights the importance of falling in love with the Venice lagoon. Nadia emphasizes that to fall in love, you need time: „You should see the ecosystem in all of its phases, not just for two hours. You should see the tide, going up and down, see what the tide leaves, and then you fall in love. It is like creating a family.“ According to her, everything in the lagoon, the mud, the currents, the tide are all forms of life. She remains in awe and surprised at everything she sees, the dawn and the sunset are never the same. Talking about his love for the lagoon, Pietro remembers Tito, a local legend from the mainland who had a kayaking association. Pietro thinks that this kayaking association was his way of making people fall in love with the lagoon. Because, in Pietro’s words, “while kayaking your ass is under water so you are at the level of the water!”

Go with the flow

Pietro views himself as a „student“ of the lagoon. According to him, he grew up in a „landbased“ way. By moving to Venice, he changed his understanding of self and of being human. Changes are very visible in Venice, he says, as they occur fast. A coastline can change in a week. That is different from, for example, the mountains. He does not view his work for the lagoon as work. He regards the whole notion of working for goals and institutions a „land-based attitude“ as it is attached to needing structure and security. He prefers to work in a watery „chaotic“ way.

After collecting water from the Mar Menor in Spain, during their visit to Italy the delegates of the Embassy of the North Sea gathered water from the „spiaggia del bacán“ at the playa of Sant’Erasmo, on one of the islands in the Venice Lagoon. Inspired by the Museum of Water – where the water tells the stories of the people and places where it comes from – the Embassy is creating its own little water collection. The plant characteristic of the Venice lagoon is the salicornia, the sunfire. It is perennial and transforms throughout the season from green to pink to red to orange. Due to the late start of the winter, we could still see some of those colorful hues. 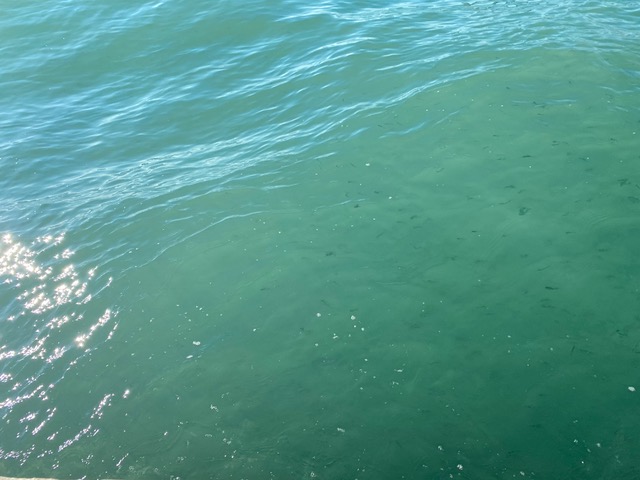 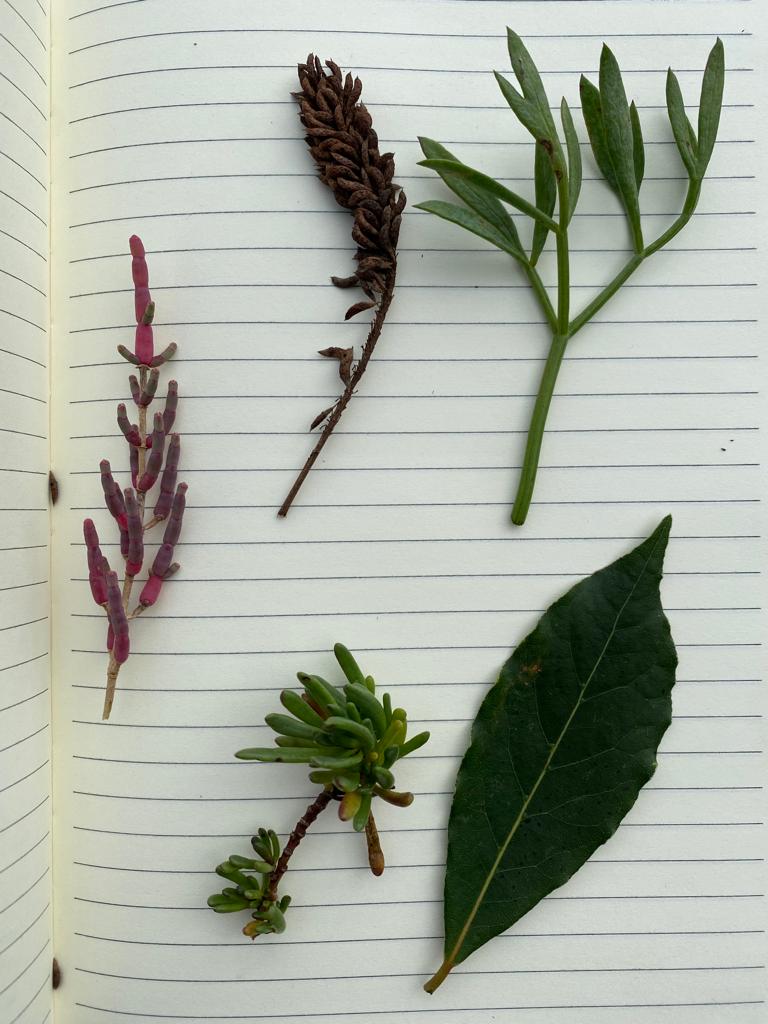 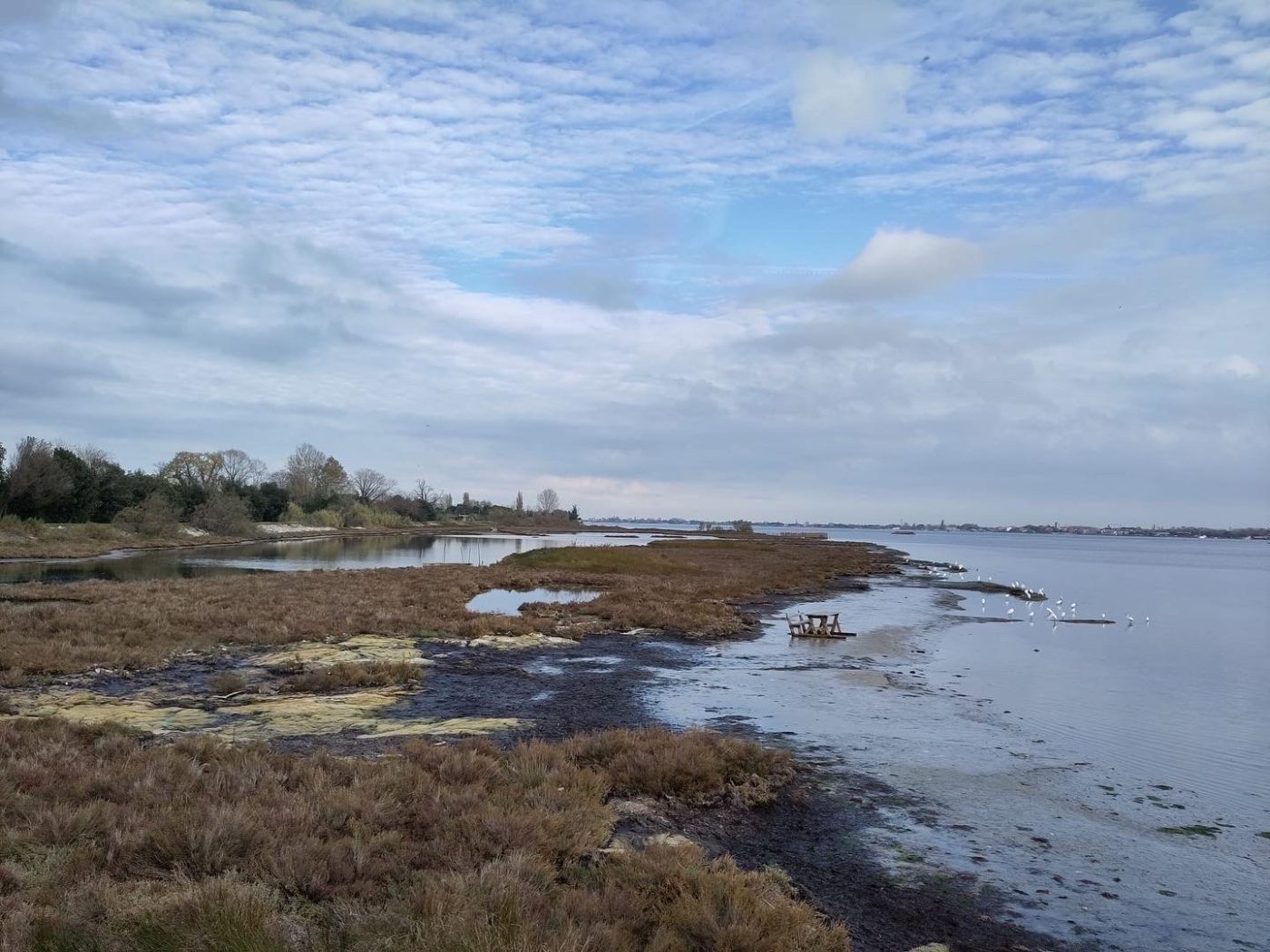 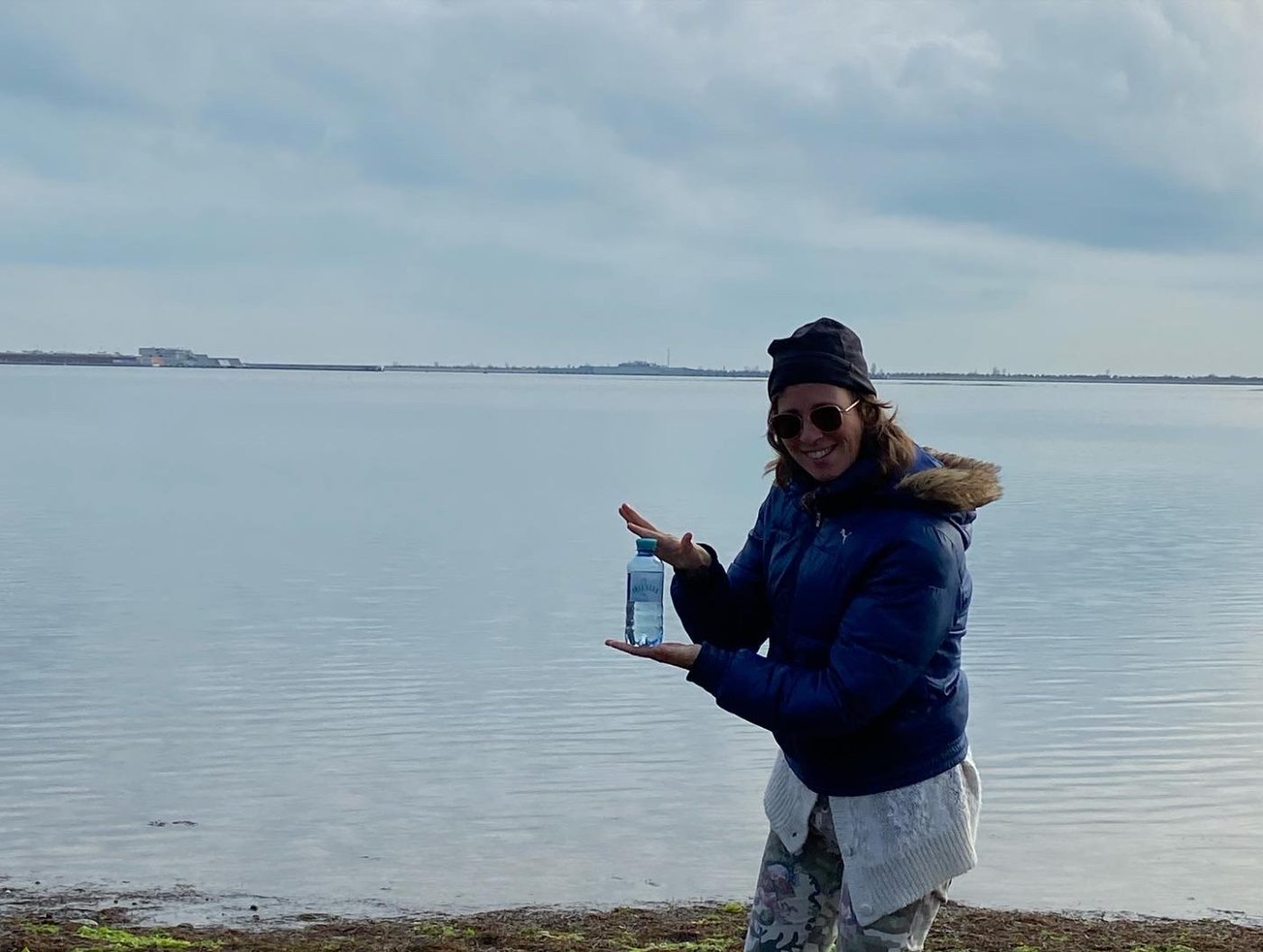