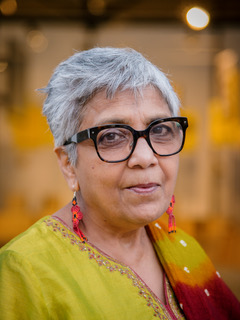 D’Souza works as a writer, critic and commentator. She is a social justice activist and worked with labour movements and democratic rights movements in her home country of India as an organizer and activist lawyer. She has worked with social justice movements in the Asia-Pacific region to focus attention on the effects of international economic policies on developing countries.

D’Souza has a BA in philosophy from Elphinstone College (University of Mumbai) and a LLB from New Law College (University of Mumbai), and she completed her PhD in Geography at the University of Auckland. She is the author of What’s Wrong with Rights? (Pluto, 2018) and Interstate Disputes Over Krishna Waters (Orient Longman, 2006) and works with the Campaign Against Criminalising Communities (CAMPACC) in the UK. Together with artist Jonas Staal she co-founded the Court for Intergenerational Climate Crimes (2021-ongoing) commissioned and produced by Framer Framed.